At the age of seven, I felt a burning desire to learn how to knit.  I don’t remember ever having seen someone knit, but I must have at some point. It seemed as though it took me forever to locate a person to teach me. I asked my mother (who doesn’t knit), my mother’s friends, and the ladies at church to no avail. I was ecstatic when my mother told me the lady on the corner was willing to show me how to knit. On the day of my first lesson, I skipped down to her house. All I can recall now is that she was Lebanese and taught me to knit English style. Cast-on, knit, purl. That was it. 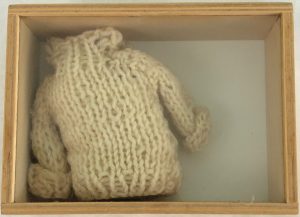 At Christmas that year I received a Barbie Knitting Kit. (Thanks, Mom!) It was a tall purple cylinder for holding straight knitting needles, and the top had a hole in it which you could thread your yarn through so it would feed easily. And there were instructions. I still have this sweater, the first I ever made. My gauge was too big, the sleeves were too long, and the back was longer than the front (so I hemmed the back). It hung on Barbie like an unlikely dress. The sweater went through two sisters after me, crammed onto various Barbies. My mother never throws anything away.

The next step in my education involved exploring the local yarn shop after school, spending my allowance on needles, various wondrous knitting gadgets, yarn (I always have preferred wool), and a Columbia Minerva book How to Knit, which I still have. From this, I learned to increase and decrease and cable and work different stitch patterns. Two years later,  a distant relative from Switzerland came to visit and knitted a sweater for my mom in a couple of days! I was astounded. She taught me to knit in the Continental style, including the purl I now call the “Norwegian Purl”. 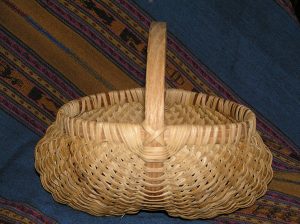 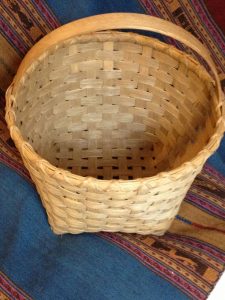 In my teen years, I branched out by teaching myself crochet, macramé, sewing many clothes, quilting, and fundamental basket weaving. By my mid-twenties, I was obsessed with spinning, weaving, and vegetal dyeing, and did the craft show circuit with my line of handspun yarns.

I opened a fiber shop with two other women in 1981 with a start-up capital of just $900. I taught spinning and knitting there, and while we never made a profit, I gained invaluable knowledge in the three years the store limped along.

I know from personal experience that knitting can be an incredible, healing solace for many. My second child, Chloë, died of Sudden Infant Death Syndrome (SIDS) while my little family was camping one weekend. This incredible loss served to teach me a lot about myself, as well as compassion for myself and others, and I learned about courage. I designed a dress for my little girl that she would never wear as my grief work. It was so healing to knit that dress!

Where I had been timid before, I suddenly knew that nothing worse could ever happen, and I was able to accomplish tasks that would have daunted me previously.  I was designing, writing articles about knitting, and being in the world much more.

A friend visited one day and showed me the book Michael Pearson’s Traditional Knitting: Aran, Fair Isle and Fisher Ganseys. As I looked through the pages, my gansey workshop popped into my head! I knitted and read, and experimented with different techniques and developed the class by practicing on the members of my local knitting guild. After I received good feedback, I sent off a workshop proposal to The Knitting Guild of America (TKGA). They accepted my class and soon I was teaching for them every year.

The correspondence course I created for TKGA grew into my book Knitting Ganseys. I found I enjoyed teaching so much, I realized I needed to develop other classes. At first, I looked to Ireland for the Aran tradition and to Scotland for the Fair Isle jumper.  Then my interest grew to include Scandinavia, the Baltic, and Canada.

By studying the rich world history of knitting, and by visiting museums in northern Europe, I have developed many more workshops–more than 40 in total!  Join me in this adventure by subscribing to my newsletter in the footer below.