The lovely knitting known as “Fair Isle” surfaced in the mid-1800s, in mittens, tams, and socks.  Vests and sweaters became popular in the early 1900s.  At first these small items were made of yarns the  color of the Shetland sheep and the local dyestuffs of the islands.

As synthetic aniline dyes became available, the color palette developed. While the construction of the Fair Isle sweater was based on the Gansey, the surface design featured bands of color and pattern, rather than texture.  Steeking was incorporated for ease of knitting, to avoid working on the wrong side with two colors.

I have been fortunate to travel all over Scotland and Shetland to study the knitting there.  While all “Fair Isle” garments are Scottish, not all Scottish knitting is considered “Fair Isle”.   Fair Isle knitting refers to color-stranded garments made with no more than two different yarns in each round, but also includes the characteristic shading of the pattern color and the background color, going from light to dark to light, or dark to light to dark.  For example, Sanquhar gloves are a Scottish tradition but they are not considered “Fair Isle” items. 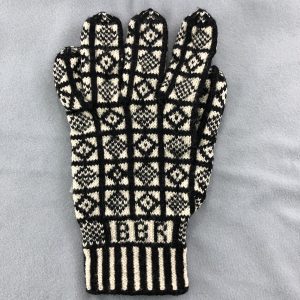