Lecture Description: This lecture surveys the different methods used to construct sweaters in Sweden, Denmark, and Norway, focusing on the Danish Skrå-trøje, the Norwegian Fana Cardigan, The Swedish Ullared, The Danish Nattrøje, the Norwegian Setesdal Lusekofte, and the Swedish North Halland Red and Black Man’s Pullover.  After looking at slides of various sweaters taken […] 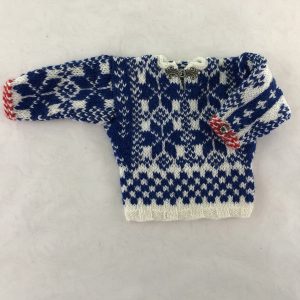 This remarkable Danish garment was created at the end of the 1800s. It is unusual in that most Danish knitting at that time was of one color, while this skrå-trøje was knitted in navy and white. In this class, a sampler will be knitted circularly to explore the following techniques: working from a chart, working […] 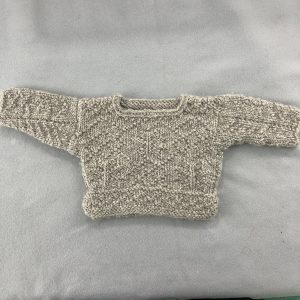 The lovely women’s “blouses” from 19th century Denmark, called “Nattrøjer”, or nightshirts, were knitted of one color in knit/purl motifs. In this class, a small sweater will be knitted circularly compiling a variety of construction techniques: split bottom welts, overlapping welts at the join, the half gusset as part of the sleeve, “seam” stitches, transposing […]

Danish pullovers from the 19th Century were knitted of one color primarily, although not always, as in the case of the Danish Skrå-trøje from Sejerø. The Danish Nattrøjer were worn by women from the 18th to 20th Century and were made of fine white wool, then dyed red, blue, or green. All the garments I […]